The Eastern Poker Tour is proud to announce that Slade Edmonds has won the $50,000 Season Finals. For his efforts, he takes home $12,000.

One hundred fifty nine players came to start play here at 11am. Some were lucky enough to start off with a “Double stack” of 200,000 in chips. Slade was one of those lucky ones. “I didn’t get too involved early in the day” said Edmonds.

Edmonds is no stranger to Season Finals Final Tables. Back in Season 28, Slade was runner up to Manny Avila. Now Slade can add a first place finish to his Finals record.

Slade was 5th in chips coming into this Final Table. “My goal was to climb up the pay scale” said a humble Edmonds.

It took 206 hands before we saw our first person out on this Final Table who was Chris Rogers. It took another 60 hands before we were able to have a winner. This Final table had some unbeliveable, and we do mean unbelievable hands. There was one hand (that you can see on the Facebook Live video) where Slade had pocket Jacks against Ace/Jack offsuit and when the board had three Queens and the 4th jack showed up on the river, the crowd was stunned that Slade had to settle for a chopped pot.

Congrats go to our highest placed woman, that was Marisol Marzette. She waited two years to play in this event because she qualified during Season 30.

The same goes for Tony Copper. He too waited two years to play.

From the time Rogers was knocked out, it took 60 hands to finish the tournament. 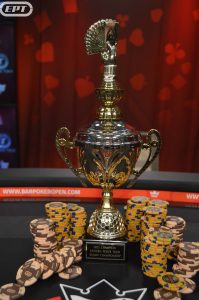 Here are the official results from the Season Finals:

Glenn, Gretel, Craig and the rest of the tournament staff would like to thank everyone who came out during the weekend to play.