On a very cold day here at the VFW in Walpole, 188 players came out and played for the $10,000 prize pool plus wanted a seat into the Season 31 Finals.

Hever Cardoza from the Rhode Island region, has only started playing EPT event since June 2021. Today was his first time qualifying for the Monthly. Not only did he make the Final Table as the chip leader, he also qualified for a seat into the Season Finals. Oh, did I forget to mention that he WON too, taking home $2500.

When we started the Final Table, Cardoza was the chip leader with 1.3 million in chips.

The Final Table lost 3 players in the first 5 hands which is unheard of! Cardoza only knocked out 1 in that time span.

Hever was crusing along until he lost a monster pot to Chris Davis when Hever’s pocket tens lost to Davis’ Ace/King who made a straight on the river and was down to 400,000. 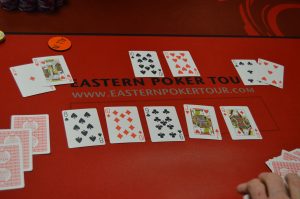 When asked what is goal was when he made it to the Final Table, in two words he said “To Win!”

Hever had a friend Ben Pires rooting him on the entire way.

Hever also said that this is his biggest win in any tournament and that he was very happy!

He enjoys playing at the Providence Firefighters Club and Bailey’s Pub on a regular basis.

Below is a picture of the final hand of the event:

Davis was down to 425,000 with the blinds at the last hand of the level which was 60,000/120,000 admitted that he was tired and at this point, it was going to be a coin-flip on every hand. You can see from the photo that Chris needed a seven or a six to prolong the tournament. 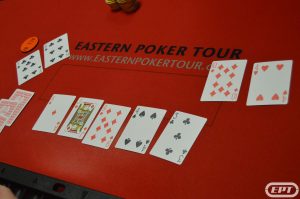 A few side notes from today:

— The Final Table lost 3 players in the first 5 hands.

Glenn, Gretel, Craig and the rest of the Eastern Poker Tour tournament staff want to thank everyone who braved the cold to come out and play.

Our next Monthly will be right here at the VFW in Walpole on Saturday February 12th at 10am.

Hope to see you there!