Manny Teixeira, who is from Taunton, Mass. represented the “Online” Region won today’s event taking home $2500 for his efforts. Teixeira who was 6th in chips coming into this Final Table had one goal and one goal only….to make the Top 8 for the seat into the Finals.

“I wanted to make it to the Top 8, then play cards” said Manny.

Manny sat there and saw Slade Edmonds eliminate player after player after player until it was heads-up with Teixeira. “Slade is a tough player. I had to wait and see if he (Edmonds) would jam when I had a good hand then I would shove forcing him to make the call”.

About 3 quarters through the Final Table, Manny had decided to buy into the 3pm $150 event late. 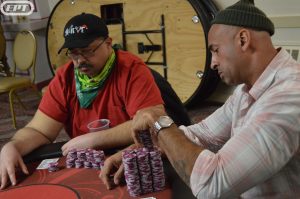 Manny had started to chip away on Edmonds huge chip stack until Slade had less than a big blind. 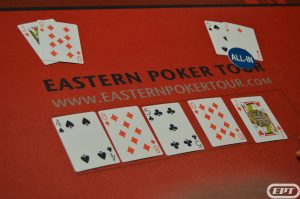 As you can see from the photo, Manny caught the jack on the river to end the tournament. “Santa is going to be good to the kids” said Manny when asked about the $2500 prize money he had just won.

Here are the final results:

We will see everyone again on January 22nd, 2022 here at the VFW for the December Monthly.

On behalf of Glenn, Gretel, Craig and the rest of the Eastern Poker Tour tournament staff, Merry Christmas and Happy New Year!