Linda Rodrigues, from the Southern Mass. region, played her heart out and won the Season 31 September $10,000 Monthly Championship earning herself $2500 AND a seat into the Season 31 $50,000 Finals.

Linda is no stranger to winning the Monthly tournament. She won this same event almost 2 years to the day

Coming to this Final Table, she was 3rd in chips. “My goal was to make it to the Top 8 then “play poker” said Linda. When she got heads-up with Jim Petrillo (CM), the hand that made her night was when she went all-in with jacks and got quickly called by Jim’s pocket 10’s. The jacks held up and Jim was down to 3 big blinds. On the very last hand of the night Jim moved with Nine/Ten off suit and Linda quickly calls with what else…pocket ACES! 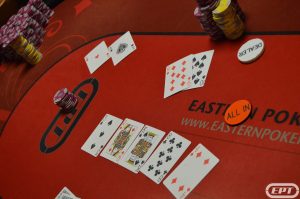 Below are the results from today’s tournament.