With a field of 198 other players, Ken was on cruise control during the day. Never behind when he got his chips all-in.

“My goal was to play good and not make any mistakes on this Final Table” says Horbert Jr. “I wanted to play my game”. He knocked out 3 players.

At any given time, Ken was 2 to 2.5x on chip stacks versus other players on the Final Table. When the blinds were at 80,000/160,000 Horbert found himself in a long heads-up battle with Paul Farrow. 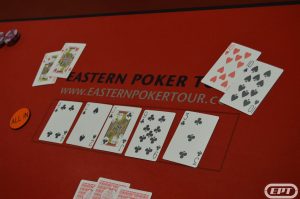 The picture above shows the final hand when Farrow went all-in with 10♥ 10♠ and Horbert Jr. had K♦ J♥. A jack came on the flop and no ten was around to help Farrow.

His good luck charm Patrick Banyaniye was by his side during this Final Table. “I learned a lot from Patrick. He’s a good friend and a tough poker player.”

Glenn, Gretel and Craig and the rest of the tournament staff would like to say “Thank You” to all who came out today and played.